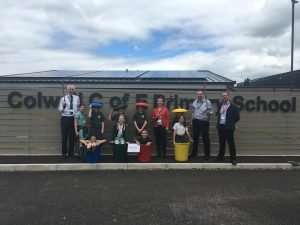 SCHOOLCHILDREN across Herefordshire are leading the charge in fighting waste with a new recycling project.

Colwall Primary School is the latest recruit to sign upto the Herefordshire Community Recycling project which has seen schools across Herefordshire recycled over 56,000 crisp packets.

The brainchild of Herefordshire Community Clean Up group founder, Andrew Wood, the seeds for the project were sown last year, when Mr Wood began to investigate the options for recycling rubbish collected on community litter picks.

A subsidiary group – Herefordshire Community Recycling Raising Money for Local Charities – was set up and, before long, their mission expanded to include educating children on recycling and the value of waste.

Each school taking part across Herefordshire is sponsored by a local business including Helping Hand Environmental – the world’s largest manufacturer of litterpickers who have sponsored the latest round of bins to be installed at Colwall Primary School.

Mr Wood said “The fee the business paid is for four coloured recycling bins for the schools, who’s each schools Eco Committee, choose which items they wish to recycle. The scheme is driven by the children with the help of teachers and parents. And the sponsor and the school will build a relationship”.

Interest in the project has been so great that there is now 27 schools across Herefordshire currently signed up to the project and a new recycling schemes developed with NHS.

Lindsay Richmond-Kearns, Communities Manager for Helping Hand Environmental said “We are delighted to be supporting this innovative project and sponsoring Colwall Primary School with their first set of recycling bins. We hope to engage with our younger generation and help to minimize waste and increase recycling within Herefordshire”.