COP 26 has been a long awaited event for everyone, hopefully it would accelerate an overall collective action towards the ‘Climate Change’ goals and those goals decided after the Paris Agreement.

Over a 2 week period world leaders and politicians would discuss multiple topics such as Energy and Nature, as well as Science and Innovation and Gender.

There was considerable pressure on the Environmental topics and putting plans in place to cap the rapid rise of the Earth’s temperature to 1.5c.

There were certainly positive points taken from the event, including bringing COP negotiations forward to happen annually instead of every 5 years. Two weeks of intense negotiation led to the below agreed and sadly, disagreed topics: 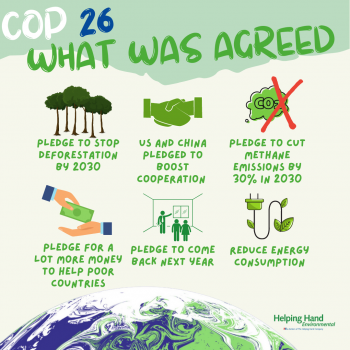 Pledge to stop deforestation by 2030

Leaders from more than 100 countries, representing about 85% of the world’s forests, promised to stop deforestation by 2030.

US and China pledged to boost cooperation

As the world’s two biggest CO2 emitters, an agreement between the US and China is seen as critical in keeping the 1.5c temperature rise threshold within reach.

Methane is a potent greenhouse gas, responsible for a third of human-generated warming. The majority comes from activities like cattle production and waste disposal.

Compared with the current goal of $1bn a year, there’s a prospect of a trillion dollar year fund by 2025.

Pledge to come back next year

With the ambition they come back with strengthened and more ambitious plans to reduce emissions. 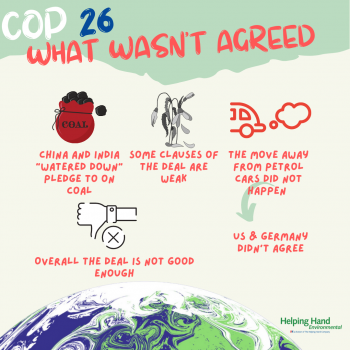 China and India watered down their pledge on use of coal

India and China pushed for a ‘watering down’ of a key commitment on coal, insisting on ‘phasing down’ rather than ‘phasing out’.

Some clauses of the deal are weak

There are clauses that allow some countries to avoid updating their plans to cut emissions, depending on ‘differing national circumstances’

The move away from petrol cars did not happen

Overall the deal is not good enough

What do you think on the finalisation of COP26? What would you have discussed differently?