Partnership working and collaboration is the key to educate and inspire children on how they can help to protect and preserve their planet. For the past two years we’ve teamed up with The3Engineers with the aim to work together to educate children around the impact of litter and to also supply schools with litter picking equipment and virtual environmental education resources. It has been a fantastic partnership to date and have achieved so much since the start of 2022, when the guys launched their first book called ‘Stop Dropping Litter’ in their series ‘The Adventures of Scout’ to the recent launch of their second book. We even have our Streetmaster Litter Pickers illustrated in their book which Scout uses on her adventures to clean up her local beach from litter! Where the journey bagan

So who are The3Engineers? Well, The3Engineers are three friends from Bristol who back in 2018 decided to dedicate their Friday afternoons to create a side project, which could help better the environment. As you can probably imagine, starting any project alongside your day job and without even a single idea in mind is always going to be tricky. However, being engineers they tactically used their unique skillsets and tools to explore themes linked to their interests being the environment, health and wellbeing and technology. After months of research exploring various ideas and concepts, the trio decided to embark on a project with the intent on making a lasting impact and educate our next generation to help better the planet. That idea was to write a series of fun rhyming children’s books to raise awareness of environmental issues, but also actively promote readers to take action to help solve the problems faced in each book they were going to create. 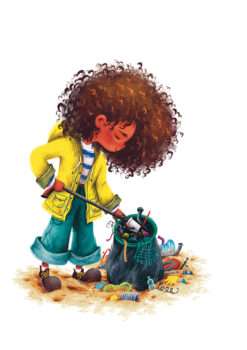 Creating ‘The Adventures of Scout’

Skipping forward four years, the ‘The3Engineers’ finished writing their book series which took influences from Captain Planet (for those around in the 1990s may remember – a super hero that looked after our natural world), and Dora The Explorer. The trio openly admit writing books was not a natural process for any of them, who openly declare their love for Maths over English which is a running joke they have. What’s interesting is how they approached writing their books. The trio spent nearly four months in book shops writing up every rhyming book they could find and came up with a tool to analyse rhyming patterns and book structures which enabled them to find their own winning rhyming formula. The fruits of their labour are a wonderfully written set of books, each following their book series main character called ‘Scout, who likes to figure things out’ on her adventures to help solve some common environmental issues we all see day to day. Each book in the series has been designed to encourage readers to join Scout’s team to help better the planet either by picking up litter, by planting seeds to feed the bees, or by upcycling household waste to help animals in our local habitats.

Nick Parker from The3Engineers stated “when conducting our research, we recognised that there was a growing list of environmentally focussed books for children which was great, but they only taught you about the impact and never really encouraged/inspired readers to take small but positive action to help solve the problem in hand”.

This passion has seen them write three books which make up their book series and have released their first book in the series called “Stop Dropping Litter” which follows Scout on an adventure to help clean up our beaches which are covered in plastic. She meets animals along the way affected by the waste and comes up with a simple but effective solution to help. The book took 11 months full time to illustrate and contains a whopping 483,250 digital brushstrokes to create and we can confirm the illustrations are stunning, the rhyming is beautiful and the message is loud and clear! 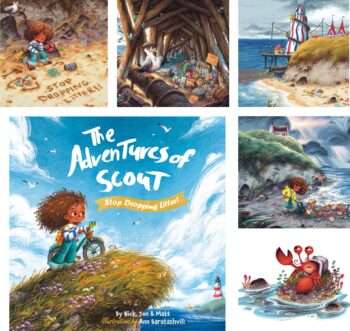 Reflecting on what they have achieved since launching their series it is quite extraordinary. The3Engineers have managed to secure funding to distribute 4,000 of their books into schools, whilst personally donating over a thousand books themselves to charities, libraries and community events. They have also used their engineering ties to partner with several STEM Learning hubs around the country, which has seen the trio give live author presentations to almost two thousand schools, reaching nearly 100,000 children since the start of year – we’ve loved joining and supporting them on this journey so far.

It is safe to say the trio have big plans for their book series and want to go on Dragons Den in a few years’ time. The trio are set to launch their second book later in the year and are about to embark on illustrating their third book later this month all about UK endangered animals.

It is safe to say we have loved collaborating with the3Engineers and sharing the message of litter prevention to our next generation – we’re excited to see what they have installed for 2023. In the menatime if you haven’t already make sure you check out their website, view their book and school resources.